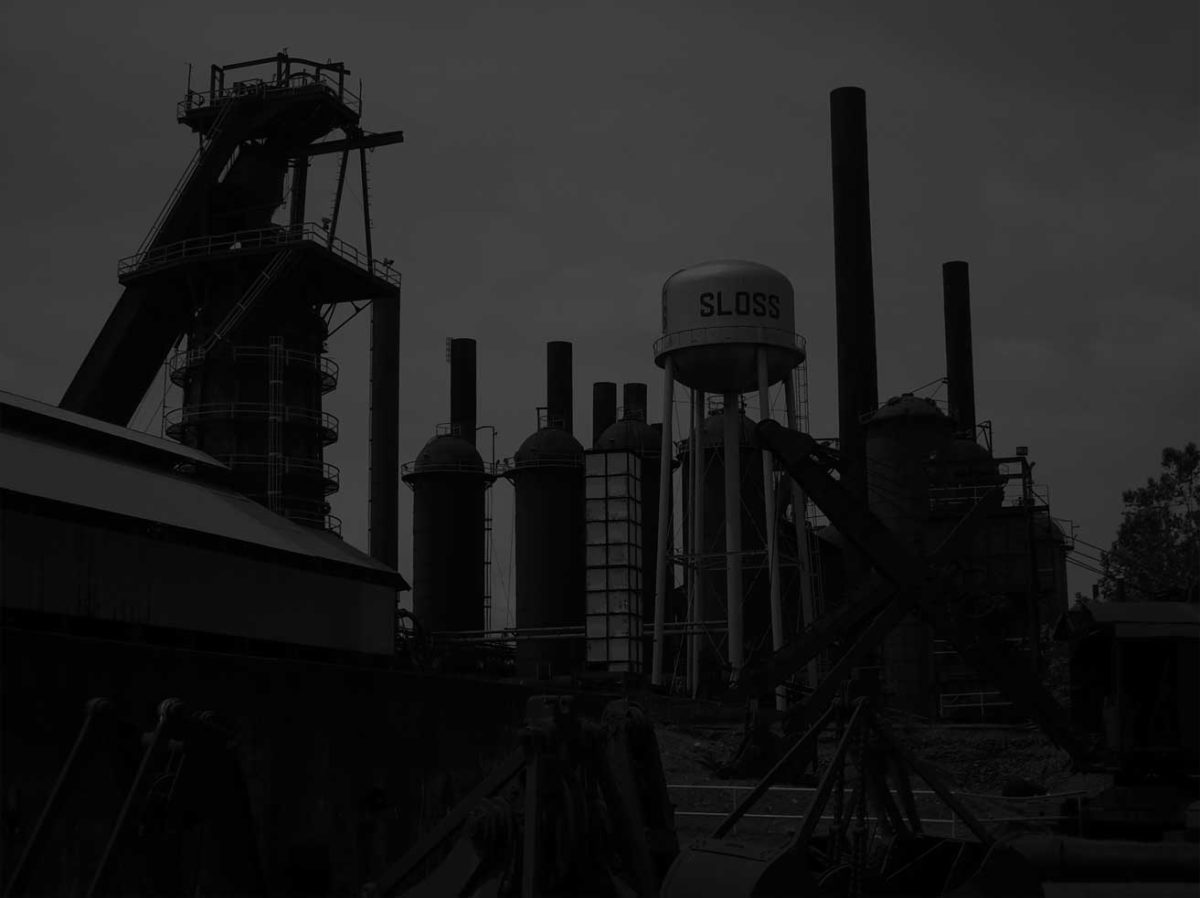 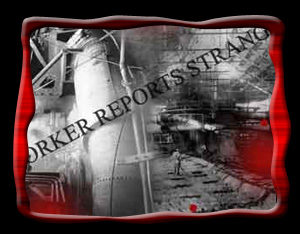 From 1882 to 1971, Birmingham’s Sloss Furnaces transformed coal and ore from surrounding acres into the hard steel that would pave the way for the industrial revolution.

From skyscrapers in New York’s glittering skyline to automobiles being built in Detroit, America came to rely on Birmingham and Sloss Furnaces for providing materials needed to produce thousands of products.  Birmingham grew to a metropolis almost overnight, earning it the nickname of “The Magic City”.

But as with all progress, a price was paid..in the currency of blood.

The Rise of Slag

In the early 1900’s, James “Slag” Wormwood, was foreman of the “Graveyard Shift”, the period between sunset and sunrise, where a skeleton crew of nearly 150 workers toiled to keep the furnace fed. 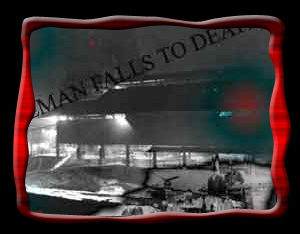 During the stifling summer months, temperatures throughout the plant would reach more than 120 degrees.  Lack of sleep, the heat, and low visibility made working the furnace literally a “living hell” and only the poorest of workers, desperate for employment, would work it.

These workers, mostly recently arrived immigrants, were forced to live in cramped housing located on the furnace site, and could be forced at any moment to return to work.

To impress his supervisors, Wormwood would make his workers take dangerous risks, forcing them to speed up production. During his reign, 47 workers lost their lives, ten times more than any other shift in the history of the furnace.  Countless others lost their ability to work due to accidents, mishaps, and even a recorded explosion in the small blowing engine house in 1888 that left 6 workers burned blind.

There were no breaks, there were no holidays, there was only the furnace.and its constant hunger for more and more coal.

The Fall of Slag 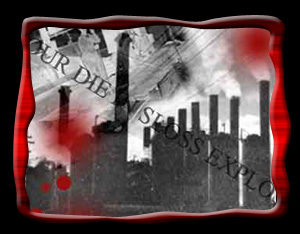 In October of 1906, James “Slag” Wormwood, lost his footing at the top of the highest blast furnace (known as Big Alice), and plummeted into a pool of melted iron ore.  His body melted instantly.

It was reported that “Slag” must have become dizzy from the methane gas created by the furnace and lost his balance–but Slag had never set foot on top of furnace during his years of employment.

Many thought that the workers had finally had enough of Wormwood’s slave driving, and fed him into the furnace–but no workers were ever brought to trial. 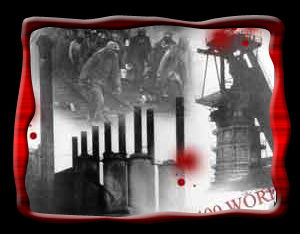 The legend of “Slag” grew each year after his disappearance. Workers complained of an “unnatural presence” they increasingly encountered throughout the work site.

A night watchman in 1926 sustained injuries after being “pushed from behind” and told angrily by a deep voice “to get back to work.”  The man, upon searching the grounds, could find no sign of any other living person.

In 1947, three supervisors turned up missing. Found unconscious and locked in the small boiler room in the southeastern part of the plant, none of the three could explain exactly what happened to them. All agreed they were approached by a man whose skin appeared badly burned and who angrily shouted at them “to push some steel.”

Probably the most horrifying tale occurred in 1971, when the night before the plant closed, Samuel Blumenthal, the Sloss Night Watchman, who was nostalgically taking a last look about, found himself face to face with “the most frightening thing he had ever seen.”  He described it simply as “evil”, a “half man/half demon” who tried to push him up the stairs. When Blumenthal refused, the monster began to beat on him with his fists.

Upon examination by Dr. Jack Barlo, Blumenthal was found covered with intense burns.  He died before ever returning to Sloss.

There have been more than 100 reports of suspected paranormal activity at Sloss Furnaces recorded in Birmingham Police records. From minor incidents such as steam whistles apparently blowing by themselves, to major sightings and the rare physical assault.  It is interesting to note that the majority of these reports happen in the months of September and October at night, during the old “graveyard shift.”

Some merely dismiss the occurrences as Halloween hoaxes; others believe it is the restless of spirit of the sadistic foreman, Slag.

In 1988, a study was conducted by the Center for Paranormal Events (CPE) in St. Petersburg, Florida on Sloss Furnaces.   While no events out of the ordinary occurred during the study (which occurred in May), many of the team members, including two psychics, claimed that due to the “violent disregard for and loss of life” Sloss Furnaces should be a considered “a location rife with restless souls.” 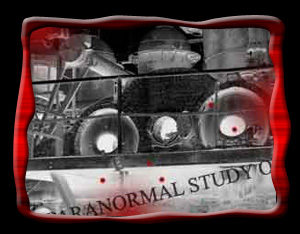 In the year 2000, Sloss was studied once again by the Paranormal Team of Fox’s Scariest Places who concluded that it was one of the highest ratets of unnatural energy they had encountered.

In early 2002, a skeptical investigative team from CBS Affiliate WJTV investigated the site–they left frazzled and convinced that Sloss was haunted capturing amazing footage that can been seen on thier site.

In addition, another investigation was held in 2003 by the Alabama Foundation for Paranormal Research who quoted that “There is no doubt Sloss is a hotspot for paranormal activity. During our investigations we pulled data that confirms through our scientific methods and approach that energys are present that cannot be explained. Sloss is one of the most paranormaly active places our team has investigated.”

On October 4 of 2003, another assualt happened to one of our crew members. Josh Thomas, who had worked at Sloss for many years, suddenly caught fire after seeing a “strange shape.” He suffered burns up and down his body and was taken to the hospitial–he still can not recall what happened.

Strangely enough, this was almost on the exact 32nd anniversary of the Samuel Blumenthal burn attack (night watchman from 1971).

In 2005, two psychic investigators from the TV show AIRLINE! investigated Sloss Furnaces, in the middle of the taping, one of them began to spontaneously bleed from a cut that appeared in his right hand, halting the investigation. But not before the camera crew caught images of spirits on their cameras.

In 2009, the Unexplained Mystery investigation team investigated Sloss, and were shocked to capture spiritual shadows on film, and in 2012 the team from Ghost Adventures visited and were physically assaulted — again, caught on film.

In 2014, TAPS (Ghost Hunters) visited Sloss Furnace and filmed ‘absolutely phenomenal’ footage proving that there is definitive spiritual activity at Sloss and have since returned to capture even more evidence.

The Sloss Furnace team continues to archive these sightings both from the press, as well as individuals on frightfurnace.com

Sloss Furnace in the Press

Thanks to our Sponsors